When the COVID-19 pandemic closed playgrounds, her research into playground use and physical activity could also have come to a halt. Instead, with the blessing of the National Institutes of Health, which was funding the work, Deborah Cohen, MD, MPH, pivoted to conducting research relevant to lighting the way through the pandemic: Who was adhering to the outdoor masking recommendations, and who wasn’t?

“Rather than twiddle our thumbs, we decided to use our skills at systematic observations to impact public health policy,” said Dr. Cohen, a research scientist with the Department of Research & Evaluation. “At that point, masks were our best hope of reducing the spread of COVID-19. We wanted to collect information about usage so we could point out where public health efforts were most needed to increase adherence.” 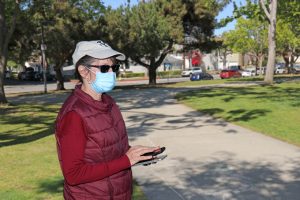 People involved in the Philadelphia study observed more than 4,600 people in 30 outdoor public spaces throughout that city, including commercial streets, neighborhood parks, and playgrounds during 3 weeks in August 2020. The Philadelphia Public Health Department announced results that month.

The research was part of an ongoing series of studies called SOMAD (Systematic Observation of Mask Adherence and Distancing). From then through June 2021, 228 researchers across the nation, including in California, recorded their observations of more than 104,000 people in public spaces.

Some of the initial findings, which includes those gathered in California and Philadelphia, showed:

The disparities in adherence suggest that the information about the risk of exposure is not uniformly appreciated by all groups, Dr. Cohen said. Given that males have more severe consequences from COVID-19 infection than females, a targeted information campaign may be required to motivate greater compliance, she said.

After the study was done in Philadelphia, the public health department issued more detailed guidance for mask use.

The first research paper resulting from the work, titled Systematic Observation of Mask Adherence and Distancing (SOMAD): Findings from Philadelphia, was published in the journal Preventive Medicine Reports. “Until vaccination has become near universal,” Dr. Cohen said, “it will still be important for people to wear masks in public settings where they might interact with others to reduce the spread of this deadly disease.”