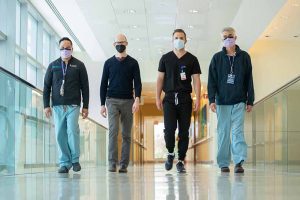 Physician researchers at Kaiser Permanente Southern California are often motivated to pursue research inspired by questions that spring from their daily practices. The questions they seek to answer are as varied as their clinical backgrounds, but they all share one common goal: finding new and better ways to improve their patients’ health.

In 2021, a “dream team” of Kaiser Permanente physician researchers became the first to report that young patients could head home on the same day as their surgery to correct a congenital chest deformity known as pectus excavatum. “Traditionally, these patients had to be hospitalized for several days in order to manage debilitating pain caused by surgery,” said R. Luke Rettig, MD, a resident at the Kaiser Permanente Los Angeles Medical Center’s Department of Pediatric Surgery. “Now we send most kids home with little to no pain on the same day.”

Pectus excavatum is characterized by a sunken-in chest that results from abnormal development of the breastbone and ribs, leading to symptoms that may include chest pain and breathing problems. Surgery can correct the condition, but postsurgical pain can persist for weeks. 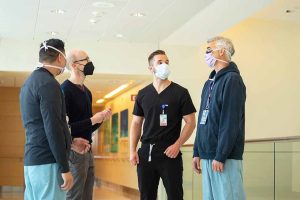 That has now changed, thanks to a new pain control strategy developed by the Kaiser Permanente Southern California Pediatric Care Surgical Subspecialties group, which includes Dr. Rettig; Roman Sydorak, MD; Donald Shaul, MD; Franklin Banzali Jr., MD; and Andrew Rudikoff, MD. The groundbreaking protocol involves freezing nerves in the chest to temporarily numb them until the pain subsides, combined with a multimodal analgesia regimen to block short-term pain that occurs before the effects of cryoablation begin.

“Families are shocked and very happy that this is now possible,” Dr. Rettig said. “Our team has performed about 40 of these procedures, and we’re spreading the word to other children’s hospitals; some have already adopted our protocol.”

The breakthrough required concerted efforts among surgeons and anesthesiologists in the Surgical Subspecialties group, as well as nurses, child life specialists, physical therapists, and more.

“This could not have happened without buy-in and sustained dedication from everyone involved,” Dr. Rettig said. “Our team dynamics are truly incredible and key for the success we’ve seen with our patients.”

From the onset of the pandemic, Robert E. Sallis, MD, suspected that people’s COVID-19 outcomes were linked to their levels of physical activity. “Most diseases associated with severe COVID-19 are also associated with inactive lifestyles,” said Dr. Sallis, a family medicine and sports medicine physician at the Kaiser Permanente Fontana Medical Center. “But, early on, the CDC did not identify lack of exercise as a risk factor.” 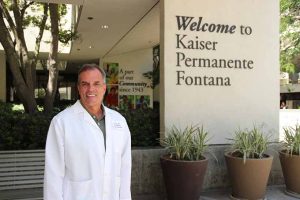 Dr. Sallis was well poised to mobilize an investigation. He has an extensive history of collaboration with the Department of Research & Evaluation; and in 2009, he pioneered the Exercise Vital Sign, which captures information on people’s weekly physical activity at every outpatient encounter within Kaiser Permanente Southern California. To study links with COVID-19, Dr. Sallis led an analysis of Exercise Vital Sign data for nearly 50,000 members who had COVID-19 between January and October 2020.

The findings revealed strong associations between regular physical activity and lower odds of being hospitalized, being admitted to an intensive care unit, or dying from COVID-19. People who exercised inconsistently were still more protected than people who were completely inactive, even after accounting for other factors including diabetes, smoking, and obesity.

“Our research was a linchpin in convincing the CDC to recognize inactivity as a major COVID-19 concern,” Dr. Sallis said.

The study adds to a large body of evidence on the health benefits of exercise compiled by Dr. Sallis over his 3-decade career at Kaiser Permanente. Much of this research has been powered by data from the Exercise Vital Sign, which has also been adopted by other major health care systems across the United States.

“By prescribing exercise, doctors can often do more good for their patients than by just focusing on traditional treatments,” Dr. Sallis said. “I’ve been incredibly lucky to collaborate with world-class colleagues at the Department of Research & Evaluation on exercise research that influences clinical practice across the country.”

Several years ago, Amandeep Sahota, MD, experienced a career-shifting wake-up call. “My son was on the high school football team, and after they had a brief break, I was alarmed to see that he and his teammates had suddenly gained considerable weight,” she said. 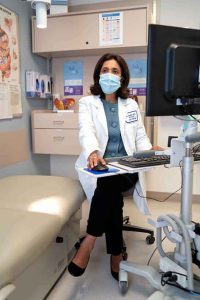 Dr. Sahota, who directs the Department of Hepatology at the Kaiser Permanente Los Angeles Medical Center, had increasingly been hearing about nonalcoholic steatohepatitis (NASH) — excessive buildup of fat in the liver that may progress to life-threatening disease. “One in 4 U.S. adults has a fatty liver and does not realize that they are well on their way to NASH,” she said. “I was worried that my son might be too.”

Galvanized by her concerns, Dr. Sahota led a study that uncovered a rise in nonalcoholic fatty liver disease — which can progress to NASH — in young adults. Meanwhile, she spoke with her son and his friends about their weight. “Fortunately, NASH can be managed by controlling cholesterol and blood pressure, eating healthy, and losing weight,” she said. “After we spoke, my son and his teammates lost weight, and I lost 30 pounds myself.”

Dr. Sahota’s personal journey sparked a new commitment to raise awareness about NASH and improve treatment for this little-known disease. Now she leads 2 clinical trials on medications for NASH and liver fibrosis in adults. “We not only want to test these promising treatments but also boost NASH awareness,” she said. “Some patients have actually ended up being too healthy to participate in the trials because they were motivated to get healthier during the screening process.”

Additionally, Dr. Sahota has developed tools to help clinicians address NASH more effectively by raising its profile in primary care, rather than confining it to gastrointestinal or hepatological care.

“This work is exactly why I came to Kaiser Permanente — because of the rich opportunities to help as many people as possible,” Dr. Sahota said.

Mingsum Lee, MD, PhD, is not one to seek the spotlight. Nonetheless, she is building a powerful legacy through her dedication to mentoring the next generation of physician researchers. “For residents and fellows, the opportunity to lead research can be transformative, because they realize that while they’re caring for the patient in front of them, their research could help many more,” said Dr. Lee, a cardiologist at the Los Angeles Medical Center and a clinician investigator for the Department of Research & Evaluation. 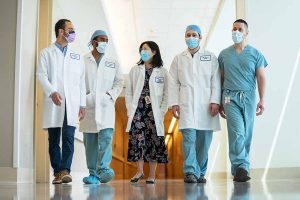 As program director for the Cardiovascular Disease Fellowship Training Program, she helps residents and fellows pursue questions that move and intrigue them. For instance, after caring for patients who developed myocarditis after getting a COVID-19 vaccination, 2 fellows became concerned about a potential connection. With Dr. Lee’s guidance, they analyzed Kaiser Permanente member data and published widely discussed findings stating that vaccine-related myocarditis is rare and mild, and the benefits of vaccinations still outweigh the risks.

“This was a great illustration of how, as frontline physicians, our clinical observations can inspire research that broadly informs care,” Dr. Lee said.

In another project, Dr. Lee has guided residents as they lead research into Takotsubo syndrome, a condition resembling a heart attack. So far, they have published 3 papers, including 1 linking beta blockers to better survival outcomes.

“I hope they’re as proud as I am about the advancements they’ve made,” Dr. Lee said. She also recently mentored 2 fellows who are passionate about tackling health inequities. They published findings highlighting disparities in post–heart attack survival between Black and white patients living in low-resource neighborhoods. Now they’re working with Kaiser Permanente leadership to translate the findings into clinical practice.

“It is quite rewarding for trainees when their research has immediate implications for patient care,” Dr. Lee said. “And for me, mentorship is a 2-way street; while I provide guidance on research, I learn from their unique talents and expertise.”

In 2009, rates of an infant lung condition known as bronchopulmonary dysplasia seemed to be rising at the Kaiser Permanente Panorama City Medical Center neonatal intensive care unit. Maria Fe Bellen Villosis, MD, was inspired to pursue a bold vision: to not only stem the rise but to drastically reduce these rates — at Kaiser Permanente and beyond.

Infants with bronchopulmonary dysplasia experience breathing problems that raise their risk of other serious conditions, such as high blood pressure and developmental delays. This disorder may develop as a result of lung underdevelopment or injury from the machines, and oxygen treatments used to help preterm babies breathe. “There is no quick fix,” said Dr. Villosis, a neonatologist who has directed the Panorama City NICU for over a decade. “But I’ve always believed that prevention is the best care.” 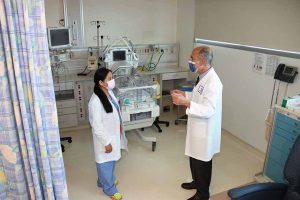 These days, Dr. Villosis and her colleagues report that rates of bronchopulmonary dysplasia have plummeted from 31% to less than 2% among very preterm babies at the Panorama City NICU. In contrast, the statewide rate for California remains at about 20%.

This dramatic improvement was the result of a comprehensive system of clinical care and team management practices originally developed by Dr. Villosis and her colleagues in 2009, and continually refined since then. Central to this approach is the care team’s shared belief that bronchopulmonary dysplasia is, indeed, preventable. “It has been amazing to see how that shared mindset enabled our team to work so effectively,” Dr. Villosis said. “We’re proud that Kaiser Permanente has taken a leading role in the prevention of bronchopulmonary dysplasia.”

She and her colleagues are sharing their strategies in the form of a road map and bronchopulmonary dysplasia prevention bundle that other NICUs can follow. “Change doesn’t happen overnight, and there were times early on when we almost felt hopeless,” she said. “But our hard work paid off, and I hope to inspire other NICUs around the world that this is possible for them too.”